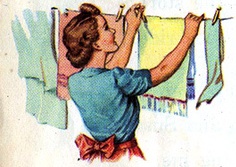 When I directed the music at Bellefield Presbyterian, the choir would recess down the middle aisle each week and stand in the back until the benediction, at which point we’d sing an Amen.

You know me. It wasn’t too long before I was writing new ones. Specifically, I wrote a series of rounds. This one I actually notated on a circular staff. (I let the choir sing it from a normal score, though, because I thought it would be unwieldy to sing while spinning your music in circles…) Amen #1.

This entry was posted in Choir, Church. Bookmark the permalink.