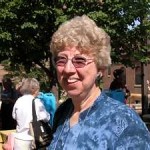 Finally, the weirdest song of the three written for Emily Brink’s retirement collection. It is quite possibly the first 12 tone hymn tune ever written. 12 tone technique, also known as serialism or dodecaphony, uses “tone rows” to give equal weight to all twelve notes of the chromatic scale. Or “one note, one vote” as we used to describe it in music school.

Since Emily began her career as a music theorist, I thought it would be appropriate to combine her love of hymnody and theory in a ground-breaking new hymn tune. I wish I had been at her retirement party when people sang through some of the songs written for her. I’m pretty sure she would be the only one who fully appreciated the musical riddle of a pungent hymn tune named DODECAPHONIA. I thought she’d also appreciate that the text was written by her long time friend and collaborator, Bert Polman, who died recently.

This entry was posted in Uncategorized. Bookmark the permalink.