Tenebrae: The Shadow of the Tomb

It is finished. This is the last of the 7 movements. In this solo movement, I recapitulate many of the themes that have appeared in previous movements, hopefully in a way that is suggestive of what’s gone on before rather than an overbearing repetition.

Once again, the Finale playback leaves much to be desired, so feel free to fire up your musical imagination and read it directly from the score: PDF. I’m sure I’ll post a recording of the service itself. We had our first rehearsal today, and even though there were lots of rough spots, it had the seeds of something really wonderful. 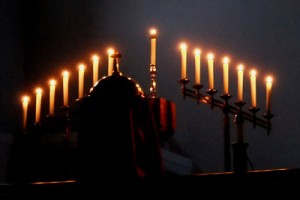 The Shadow of the Tomb: Matthew 27:57-60
57 When it was evening, there came a rich man from Arimathea, named Joseph, who was also a disciple of Jesus. 58 He went to Pilate and asked for the body of Jesus; then Pilate ordered it to be given to him. 59 So Joseph took the body and wrapped it in a clean linen cloth 60 and laid it in his own new tomb, which he had hewn in the rock. He then rolled a great stone to the door of the tomb and went away.