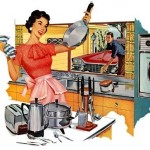 Speaking of spring cleaning, you’ll need to spring clean your ears after you’re done listening to this one. No, actually, I quite like this one; but it certainly isn’t easy listening music. I wrote it toward the end of my undergrad days. The second recording is of me on bass and my friend Jim DeFrancesco playing it at my senior recital. At one of our rehearsals my father said it sounded like it was composed by Palestrina’s demented younger brother. The first recording is performed by Andy Kohn, a guy who can actually play all the notes at tempo and on pitch. (Thank you, Andy!)

Astute listeners will recognize a quote from Bach’s chorale “Ach Wie Flüchtig” at the end of the piece. In fact, the whole piece distills the biting dissonance of that chorale, but whereas Bach resolved the tensions, I leave them hanging. If you know much about string bass solo literature, you’ll know that it’s mostly frothy show off stuff. I like that “Elegie” uses the entire range and playing techniques of the instrument while not losing focus on the music. Ironically, when I played it at a bass master class for a prominent bassist, he didn’t know what to say about it. There was a moment of awkward silence as he tried to think of something nice to say about the piece or my playing, and then he quickly moved on to more frothy show off stuff.

This entry was posted in Art Music, Live. Bookmark the permalink.