An Offering of Praise 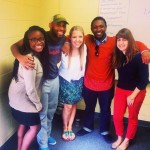 I’ve been in Richmond working with five talented young songwriters in the Urban Doxology Songwriting Internship. Their task: write great new songs for urban churches, using East End Fellowship as a test congregation. But what kind of songs should they be? Should they mimic hip hop? “Urbanify” songs from the CCLI charts? Continue the black gospel tradition? A little of all three?

I figured I had given them enough grief about their songs over the last few weeks that it would be unfair for me not to give it a try myself. What I came up with has a Bruno Mars “Locked Out of Heaven” feel in the beginning, some juicy gospel chords in the chorus, and a modern P&W style repeated bridge. (That doesn’t make it three times as good as a mono-style song, I just thought it was interesting enough to note.) Lyrically, I decided that an urban song could (should?) have simple, direct lyrics that would relate to a wide variety of educational backgrounds (this is true at EEF, at least). I was also eager to return to the basics of salvation and righteousness in Christ. We shouldn’t get tired of that, right?

Here’s the MP3 I recorded on my computer’s mic with just my voice and a guitar. (Granted, I had some help from Logic Pro X’s drummer and octave transpose pedal.) The recording makes me sound insanely white. I’m confident that if the interns sing it, it will quickly sound more urban.

1. Imprisoned in a pit of shame,
That I had dug with my own hands.
Locked within these prison walls
Of my own making.
Everywhere the smell of sin—
Regrets, remorse, a heart of pain.
And I had given up all hope
Of salvation.

2. Released from such a debt of sin,
Redeemed from certain death I live
Renewed to the holy radiance
of my Savior.
Live as a debtor to his love.
Live in his grace, it is enough.
Live every day in confidence
Of his favor.     CHORUS

3. Nothing I have ever done
or will ever do will change his love.
He looks on me and sees his Son;
Sees me righteous.
Righteous in the work of Christ,
The Holy Lamb once sacrificed,
Once, for all, throughout all time.
It is finished.     CHORUS

This entry was posted in Church, Congregational Songs. Bookmark the permalink.

1 Response to An Offering of Praise