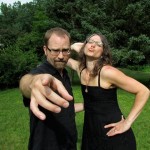 Look at this couple–they were destined to be together!

This year’s anniversary was one of the weirder ones in Amy and my 21 years of marriage. I’ve been on sabbatical in Richmond, VA, working with the Urban Doxology Songwriting Internship and writing a new book, while Amy has stayed home with the boys. Making my wife a single mom for nearly two months makes me about the biggest heel in the history of marriage.

But even though I was 800 miles away, I woke up the morning of my anniversary thinking about Amy and thankful for our marriage. This turned into a little anniversary song by the time I was out of the shower. An hour later I roped the interns into recording it with me. (I knew that KP Purdie’s buttery vocal tones would sell the smooth R&B feel I imagined for the song.) Unfortunately my computer was broken at the time, so I wasn’t able to surprise Amy with it on our actual anniversary. But better late than never.

Listen to the love: MP3