One of my greatest joys is when a song takes on a life of its own and begins to travel to unexpected places and people. My setting of Simeon’s Song, “Lord, Now Let Your Servant Depart in Peace” was recently sung in Bahasa (Indonesian) and Chinese translations at GKY Mangga Besar Church in Jakarta. 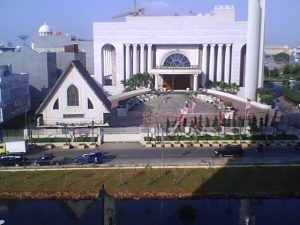 My friend, Lucky, was behind this. I met Lucky in 2015 when I was in Indonesia and he was just about to head to Grand Rapids to study at Calvin Seminary. His family and mine became close while he was in town. I was sad to see them return to Jakarta, but knew that God had big plans for them back at the GKY Church. This Christmas he decided to introduce my song to his congregation, and you can hear that his people really took to it.

One of the things I loved about worship in Indonesia is that people sing with all their heart. In this recording, you can hear the pastors urging on the congregation, and the people responding with full voices. I believe I’m also hearing a pipa (a strummed Chinese instrument that sounds a little like a mandolin tremolo) in the chorus, which sounds surprisingly good.

This entry was posted in Church, Congregational Songs, Global, Live. Bookmark the permalink.