And the final sketch that lost to “Swampzilla”?: It’s called “Crepuscular Ray,” and is something of a minimalist piece for young players. The music sounded to me like shafts of light coming through the clouds at sunset. It turns out there’s a word for that: crepuscular ray. I couldn’t resist choosing a title that featured a word most people would need to look up. 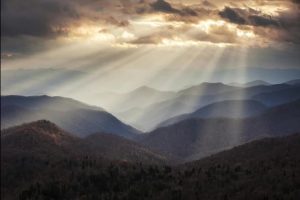 Interestingly, director Erin De Young was already familiar with the term. Her young boys had been reading a book on animals one night and it explained that rabbits and deer are called “crepuscular” animals because they come out to feed at twilight. As fate would have it, the next day they visited a nature center where the guide asked what kind of an animal a rabbit is. She was probably looking for “mammal” or something simple, but Erin’s 5-year-old piped up without hesitation: “It’s a crepuscular animal!”

Even though this sketch lost to “Swampzilla,” I still think it has lots of potential for a high school orchestra. Feel free to contact me about a commission.